Elite Infantry: As the military gets smaller, it needs to be more elite

Elite Infantry: As the military gets smaller, it needs to be more elite

(Which means LESS women and NONE in Combat)

Marine Officer Katie Petronio wrote abut the struggle of physical reslience during her deployment to Afghanistan commanding a Combat Engineering platoon in Afghanistan.

“By the fifth month into the deployment, I had muscle atrophy in my thighs that was causing me to constantly trip and my legs to buckle with the slightest grade change. My agility during firefights and mobility on and off vehicles and perimeter walls was seriously hindering my response time and overall capability. It was evident that stress and muscular deterioration was affecting everyone regardless of gender; however, the rate of my deterioration was noticeably faster than that of male Marines…”

Her rate of deterioration was faster because she only produced a fraction of the muscle repairing testosterone of the male Marines.  Petronio, who was a varsity athlete in college and “benching 145 pounds when I graduated [college] in 2007” was falling apart at the fifth month of her deployment.  Army units deployed for 12 months until recently.

Many elite female athletes can outperform male soldiers when the women have adequate rest, recovery time and nutrition–but rest, recovery and proper nutrition are in short supply at Combat Outpost Zerok.  Combat is not like sports season where you only have one or two games a week for three months, or training for one or two big events a year.  It is every day for 365 days, then a period of recovery before resuming pre-deployment training and then another 365 days.  (330 days with leave and R&R).

Many who support opening up combat arms to women so that they have equal career opportunities do not understand that to reach the top of the infantry ranks rquires incredible physical reslience.  On the enlisted side, Company First Sergeants are in their late thirties and still going after years of deployments.  On the officer side battalion and Brigade Commanders must maintain their prime physical conditioning into their forties–after years of deployments.

The number of women who at the age of 40 are capable of keeping up with young men in a combat environment is very small. 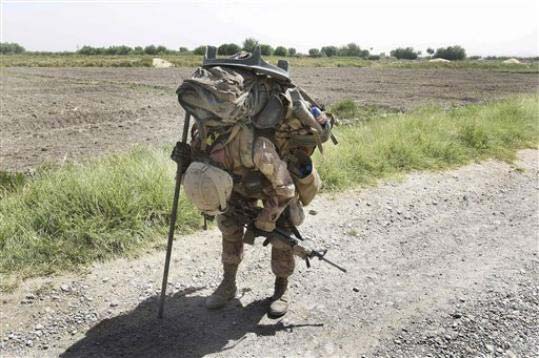 REAL LIFE: Female soldier in Afghanistan attempting to carry a “full combat load;” she couldn’t do it, and she eventually had to “off-load” 50% of her “combat load” on her male counterparts. This happens all too often today in the military, and male soldiers are “fed-up” with it.

Forty years toiled in the Tel-com industry, married for 36 years widowed at sixty-one. New girlfriend at sixty-five. Was a Tea Party supporter. Today a follower of the Last American President to be honestly elected, Donald J. Trump.
View all posts by On the North River →
This entry was posted in All the News not fit to print., Military, War, When Progressives Attack and tagged Women in Combat. Bookmark the permalink.

3 Responses to Elite Infantry: As the military gets smaller, it needs to be more elite