A rally to support Trump in Natick turns violent. Police arrest a man after being called to the Town Common for a report a person was pepper-sprayed.

Not peaceful.  Mainly the assaults were committed against the Trump supporters; smashed smart phones, signs ripped and broken, threats and even a vehicle used in a threatening way.  Many of the anti-Trump protesters were high school age.  This is the price for ignoring what the Left has been doing to American education for decades.

In Weymouth, the Trump Rally went by without incident (as far as I can find). 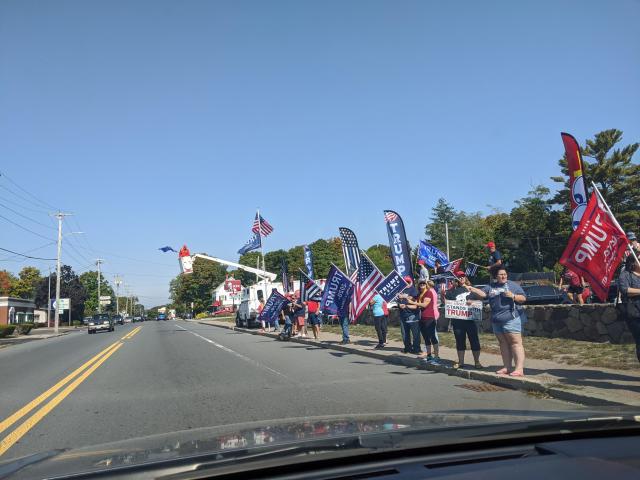 Probably because it was smaller and is mostly white and middle class.   No Biden/Harris signs in town, and few BLM either.  Not many Trump signs for that matter, but probably because they get vandalized or stolen.  I’ve lost two.

Forty years toiled in the Tel-com industry, married for 36 years widowed at sixty-one. New girlfriend at sixty-five. Was a Tea Party supporter. Today a follower of the Last American President to be honestly elected, Donald J. Trump.
View all posts by On the North River →
This entry was posted in 2020, All the News not fit to print., MAGA. Bookmark the permalink.