I thought we could never be this stupid again.

Antifa has finally crossed the line from thuggish to outright terrorist — and now, as a new bombshell report finds, members of the protest groups are actually crossing into Syria to receive training from ISIS terrorists.

Hint: Boasting about your plans on your Facebook page fails Military Intelligence 101.

The Left is receiving “military” training, but only if you extend that word to include the … Syrians. Even the Syrian Army has to stoop to ISIS to find someone incompetent enough that they can beat.

And they’re getting their training from the current second-place winners in the Syrian Intramural Combat Games? Well-played, Antifa. I’m quaking in my boots.

Of course the purpose of this effort is to bring home the ‘skills’ and the ‘terror’ of their wrath to the fight against the Normals living in The United States of America.  And to force the ‘illegal’ regime of President Donald Trump out of office.  May I suggest as does (Mike @ Cold Fury) the writer that things may not go as they hope. 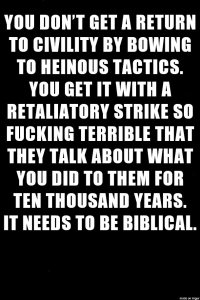 And once the shooting starts, they may discover to their new-found horror, that the other side won’t respect the sovereign sanctity of mommy’s basement, and may in fact follow them inside and continue to march, stomp a mudhole in their sunken chests, and then move to the next house.

They’ve only ever been tolerable and tolerated, as a peacetime “loyal” opposition.
If this goes hot, they’re now a national luxury, and they’ll be gone in short order. Partly by mass desertion and/or voluntary self-deportation and exile, and the rest of the way by mass extermination, in perpetuity

Transitioning to an armed rebellion actual enemy combatant force will be an extinction level event for the entire Leftism Inc. cause, and the cleansing that follows is liable to go all the way to their NWO corporate sponsors right from the get-go. With some notable gusto, and there won’t be any military or law enforcement response to save them should that bottle become uncorked.

Antifa, hiding behind their masks, thinks that mobbing old guys and women, and taking pepper spray makes them tough customers. I don’t think, deep down, they really want to try their hand at watching their own guts spill out in their hands, or cradling their dead friends with only half a head left.

There is a reason Fidel and Mao lived with their troops and cadre in the field, and didn’t try to control their revolutions from four star hotel suites or the in mansions on the pristine waters of lakes near resort towns.

“This business will get out of hand and we will all be lucky to live through it”,  (sound familiar?).

Certain former Presidential Candidates and white haired millionaire socialists will start it and very quickly lose control of the beast.   They should understand, Bill Ayers was incredibly lucky; he didn’t end up strapped to a seat in a execution chamber or stood against a wall.   I doubt they will be as fortunate.  Not if I get a vote. 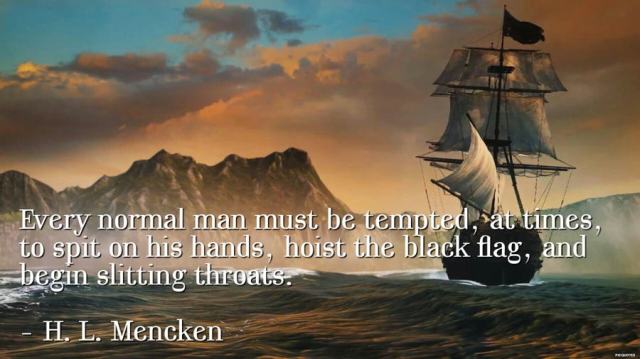 Forty years toiled in the Tel-com industry, married for 36 years widowed at sixty-one. New girlfriend at sixty-five. Tea Party supporter. Today a follower of the God-Emperor Donald. Do like to kayak, cook, take photos, bike, watch old movies and read.
View all posts by On the North River →
This entry was posted in All the News not fit to print., Can't fix Stupid, Deep State, Time to talk a little treason, War, When Progressives Attack. Bookmark the permalink.