The thought occurs to me

‘China-Russia-Canada-America line’ would run for 13,000km across Siberia and pass under Bering Strait through 200km tunnel

As the story says, the Chinese didn’t say that they had talked to the Russian or American Governments about this yet…

Putin is tough, yes that is admitted.  And he is pulling Barry’s pantaloons up over his head and more than a few people are grinning over that.  But after you back tough and shrewd out of the discussion the question remains is this really smart?  Within the next ten to twenty years demographics indicate that Russia is going to be a mess.  Lots of old Russians, not many (not enough) young Russians, the educational shortcomings are going to be biting them in the ass, and Russia’s untapped mineral resources are in a under-populated region closer to their historical enemy China (forget WWII, think Tartars and Mongols).  Russia in the post-Putin era is going to be in serious need of friends and allies, twenty years ago when NATO began to make entreaties to the former Warsaw Pact countries to join NATO I figured that was a great deal for Russia.  In fact (amateur political scientist, me) thought, after some serious thought, that it was the only chance that Russia had to retain it’s western half without going to nuclear war with a country that they had no hope of beating in a long term conventional war.

After the last year and where-ever this all goes in the next year to come, if Russia fights China, the European and American countries and their markets will be stepping all over each other to sell the Chinese the materials and technology to exploit their new provinces. If the Russians allow Putin to continue to alarm and antagonize the Western Democracies long enough,   well, they had better start learning to speak Mandarin. 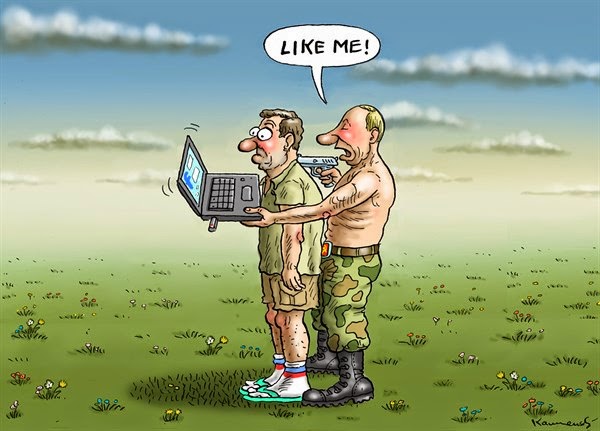 And now for something completely different…

“I would never join a club that would have me as a member”… Not this time.

“Conversation ensued … Photos were taken. Relaxation was had. Why can’t every Saturday be a naked-with-friends-in-the-sun Saturday?” they write on their blog.

I’m not entirely clear why reading and toplessness go together, but I can’t help but warm to the evident fun the book group is having in the pairing (check out the pictures on their blog – although possibly not while you’re at work). I emailed founder A Andrews to ask what was behind it all; she told me that “four summers ago, my best friend and I were talking about the law in New York that says women are free to go topless anywhere a man can, and about the fact that no women ever did. It clearly wasn’t because no woman would ever want to – when it’s 90 degrees outside, who wouldn’t rather be bare-chested than suffering under a shirt and bra? But most women didn’t know they had this right, and those who did were often afraid to take advantage of it. So we decided to create a group to combat that ignorance and fear. We made it a book club because we loved books and loved hanging out with other people who loved books.  And it’s been going strong ever since.”

I’m going to miss this after the muzzies take over…won’t you?

Forty years toiled in the Tel-com industry, married for 36 years widowed at sixty-one. New girlfriend at sixty-five. Was a Tea Party supporter. Today a follower of the Last American President to be honestly elected, Donald J. Trump.
View all posts by On the North River →
This entry was posted in All the News not fit to print., Cheesecake, Foreign Newspapers, Men vs Women and tagged and Books I forgot books, Putin, Tits. Bookmark the permalink.