Sympathy for the Devil.

Powerline article on the Bundy Ranch

So let’s have some sympathy for Cliven Bundy and his family. They don’t have a chance on the law, because under the Endangered Species Act and many other federal statutes, the agencies are always in the right. And their way of life is one that, frankly, is on the outs. They don’t develop apps. They don’t ask for food stamps. It probably has never occurred to them to bribe a politician. They don’t subsist by virtue of government subsidies or regulations that hamstring competitors. They aren’t illegal immigrants. They have never even gone to law school. So what possible place is there for the Bundys in the Age of Obama?

There is no more place for them than there is for me.   Ask not for whom the Bell Tolls, It tolls for us all (God-fearing, working class, native born Americans) 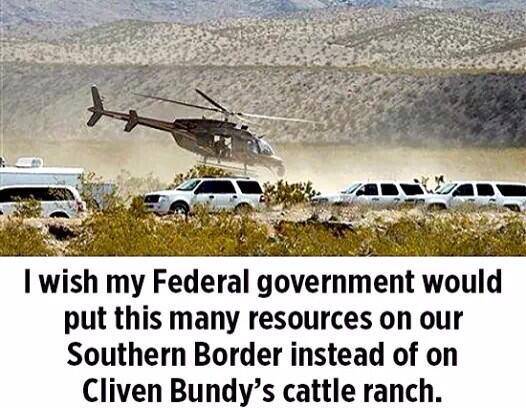 Forty years toiled in the Tel-com industry, married for 36 years widowed at sixty-one. New girlfriend at sixty-five. Was a Tea Party supporter. Today a follower of the Last American President to be honestly elected, Donald J. Trump.
View all posts by On the North River →
This entry was posted in All the News not fit to print., Fuck Obama, News and opinion, The Regime, Time to talk a little treason, When Progressives Attack and tagged Cliven Bundy. Bookmark the permalink.