I’m sure there’s a statue.

Received this story from my old fogies group, it’s posted below.  After I read it the thought occurred to me; if there’s a statue of him somewhere the current crop of idiots will try to pull it down.

I’m sick and disgusted with what’s become of America.  Is this what we got back for fifty years of Affirmative Action and Welfare?  We should have saved our money.

Subject: Fwd: An old man and a bucket of shrimp

It happened every Friday evening, almost without fail, when the sun resembled a giant orange and was starting to dip into the blue ocean.

Old Ed came strolling along the beach to his favorite pier.

clutched in his bony hand was a bucket of shrimp. Ed walks out to the end of the pier, where it seems he almost has the world to himself. The glow of the sun is a golden bronze now.

Everybody’s gone, except for a few joggers on the beach. Standing out on the end of the pier,

Ed is alone with his thoughts…and his bucket of shrimp.

Before long, however, he is no longer alone. Up in the sky a thousand white dots come screeching and squawking, winging their way toward that lanky frame standing there on the end of the pier.

Before long, dozens of seagulls have enveloped him, their wings fluttering and flapping wildly.

Ed stands there tossing shrimp to the hungry birds. As he does, if you listen closely, you can hear him say with a smile, ‘Thank you. Thank you.’

In a few short minutes the bucket is empty. But Ed doesn’t leave. He stands there lost in thought, as though transported to another time and place.

When he finally turns around and begins to walk back toward the beach, a few of the birds hop along the pier with him until he gets to the stairs, and then they, too, fly away.

And old Ed quietly makes his way down to the end of the beach and on home.

If you were sitting there on the pier with your fishing line in the water, Ed might seem like ‘a funny old duck,’ as my dad used to say Or, to onlookers, he’s just another old codger, lost in his own weird world, feeding the seagulls with a bucket full of shrimp.

To the onlooker, rituals can look either very strange or very empty. They can seem altogether unimportant….maybe even a lot of nonsense.

Old folks often do strange things, at least in the eyes of Boomers and Busters.

Most of them would probably write Old Ed off, down there in Florida. That’s too bad. They’d do well to know him better.

His full name:  Eddie Rickenbacker. He was a famous hero in World War I, and then he was in WWII.

On one of his flying missions across the Pacific, he and his seven-member crew went down. Miraculously, all of the men survived, crawled out of their plane, and climbed into a life raft.

Captain Rickenbacker and his crew floated for days on the rough waters of the Pacific. They fought the sun. They fought sharks. Most of all, they fought hunger and thirst.

By the eighth day their rations ran out. No food. No water. They were hundreds of miles from land and no one knew where they were or even if they were alive.

Every day across America millions wondered and prayed that Eddie Rickenbacker might somehow  be found alive.

The men adrift needed a miracle. That afternoon they had a simple devotional service and prayed  for a miracle.

They tried to nap. Eddie leaned back and pulled his military cap over his nose. Time dragged on.  All he could hear was the slap of the waves against the raft…suddenly Eddie felt something land on the top of his cap. It was a seagull!

Old Ed would later describe how he sat perfectly still, planning his next move. With a flash of his hand  and a squawk from the gull, he managed to grab it and wring its neck. He tore the feathers off, and he and his starving crew made a meal of it – a very slight meal for eight men. Then they used the intestines for bait. With it, they caught fish, which gave them food and more bait….and the cycle continued. With that simple survival technique, they were able to endure the rigors of the sea until they were found and rescued after 24 days at sea.

Eddie Rickenbacker lived many years beyond that ordeal, but he never forgot the sacrifice  of that first life-saving seagull. And he never stopped saying, ‘Thank you.’ That’s why almost every Friday night he would walk to the end of the pier with a bucket full of shrimp and a heart full of gratitude.

And now you know another story about the trials and sacrifices that brave men have endured for your freedom.

As you can see, I chose to pass it on. It is a great story that many don’t know…

You’ve got to be careful with old guys; you just never know what they have done during their lifetime!!

Thank you to those that sacrificed. 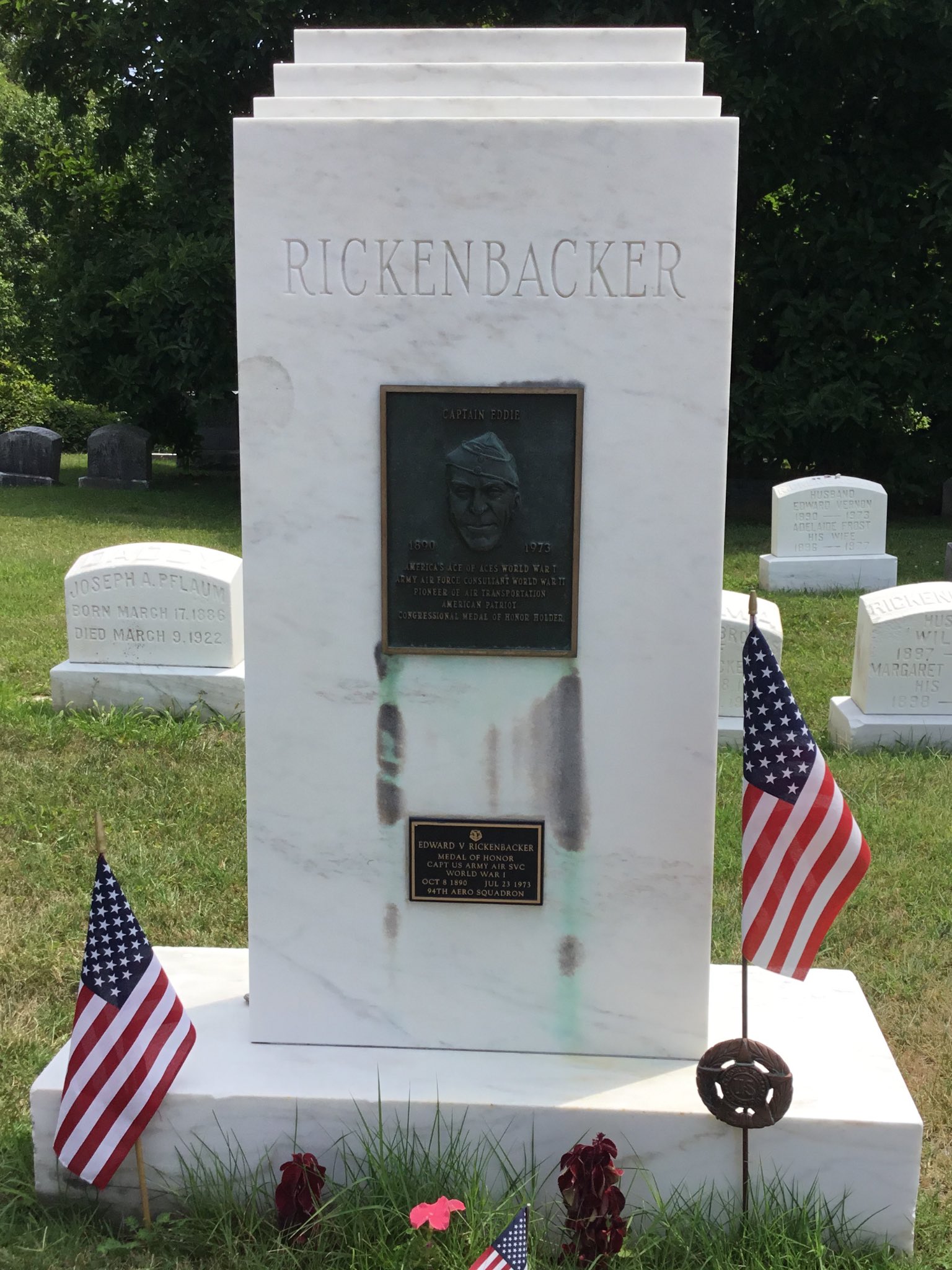 Forty years toiled in the Tel-com industry, married for 36 years widowed at sixty-one. New girlfriend at sixty-five. Was a Tea Party supporter. Today a follower of the Last American President to be honestly elected, Donald J. Trump.
View all posts by On the North River →
This entry was posted in 2020, Blogbits, War. Bookmark the permalink.

1 Response to I’m sure there’s a statue.