As an anti-coronavirus therapy, Remdesivir has been rather disappointing. That’s primarily because the drug is given intravenously to those who are already very ill with COVID-19. But what would happen if the drug could be delivered directly to the lungs, to prevent severe disease? Gilead is giving it a shot. Here are some of the pros and cons of that approach.

Over the past few months I’ve been arguing that remdesivir, the only approved drug for SARS-2 infection, was never going to make a meaningful impact on COVID because it is an IV-only drug, meaning that it will only be administered to very ill people who are in the hospital and who would most likely benefit least from the drug.

So I’ve been calling for a pill – something that Gilead previously stated that it had no intention of developing (1). But the company has an alternative in mind; a dry powder inhaler (DPI) of remdesivir which would be delivered directly to the lungs where the drug is needed most. Dry powder formulations of steroids and long-acting beta-adrenergic agonists (LABAs) have become the mainstay of asthma and COPD. Will this strategy work to control coronavirus? It makes a lot of sense but it only goes so far – there are plusses and minuses.

Dry powder steroids have revolutionized the way asthma is treated (2). The drug is delivered in a metered-dose, only to the lungs. Although small quantities of the steroid are absorbed into the blood, this amount (and thus, the myriad of side effects) is minuscule compared to that of oral steroids – something to be avoided whenever possible. Systemic corticosteroids are dangerous and unpleasant to take (See: Prednisone: Satan’s Little Helper.). 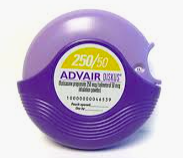 Although most DPIs are combinations of different steroids and beta-agonists there are exceptions. Muscarinic antagonists (Ellipta, others) act by relaxing smooth muscle cells in the lung.
Although most DPIs are intended for asthma there are exceptions. There are four FDA-approved flu medicines (3). The best known are Tamiflu and Relenza. There is little difference in efficacy between the two –they both suck – but at least Relenza won’t have you spewing up breakfast like Tamiflu:

“SO MUCH BARFAGE. the first night I was up all night chained to the toilet… “

From 4 Prescription Drugs People Hate, May 2019

So at least in theory, inhaled remdesivir sounds like a very good idea.

Although delivering an antiviral drug to the site of infection may seem like an ideal solution this is an untested approach.

ACSH advisor and infectious disease expert Dr. David Shlaes is not so sanguine about the prospect of inhaled remdesivir;

Regarding COVID, there are several problems here. The first is that COVID may not be just a pulmonary infection so direct delivery may not provide sufficient systemic exposure to treat other body sites of infection. The second is related to pulmonary elimination of foreign material – which is very efficient. The formulation has to be one that keeps a highly water-soluble molecule from diffusing away instantly. Then there is the issue of safety – yet to be determined.

Although virtually all the news (3) about treating/preventing COVID-19 involves vaccines, I’ll breathe a lot easier when an effective antiviral is out there. Plenty can go wrong with vaccine development despite the irrational exuberance we are now witnessing.

(1) Although Gilead stated months ago that it was not going to develop remdesivir in pill form it would seem that the company has changed its mind.

(2) It is known that it is better to prevent asthma attacks rather than treatment. While rescue inhalers are still necessary I was able to stop carrying one 20 years ago.

(3) I am not including amantidine. Although it is approved for influenza it is essentially worthless.

(4) With the bizarre exception of hydroxychloroquine. See Dr. Chuck (Chucky D.) Dinerstein’s article on the latest twist to this strange story.

Forty years toiled in the Tel-com industry, married for 36 years widowed at sixty-one. New girlfriend at sixty-five. Was a Tea Party supporter. Today a follower of the Last American President to be honestly elected, Donald J. Trump.
View all posts by On the North River →
This entry was posted in 2020, Blogbits, Guest, On the Ebola River, PSA. Bookmark the permalink.