OK   I never pass on those emails that say “Pass this on”  but for this one I’m making an exception. (Took place November 2011)

Those who attended the game said it was extremely emotional to see the entire bowl of the stadium turn red, white and blue. It took 90 workers two weeks to get the entire colored card boards mounted under each seat.  Each piece of card board had eye slits in them so the fans could hold up the colored sheet and still see through the eye slits.  Every seat had to have the proper card, with no mistakes, to make this happen.
This is what ESPN failed to show you Monday night, Apparently, they thought their commercials were more important than showing this scene for about 5 seconds.

This picture from an different event, two months earlier. (according to Snopes) 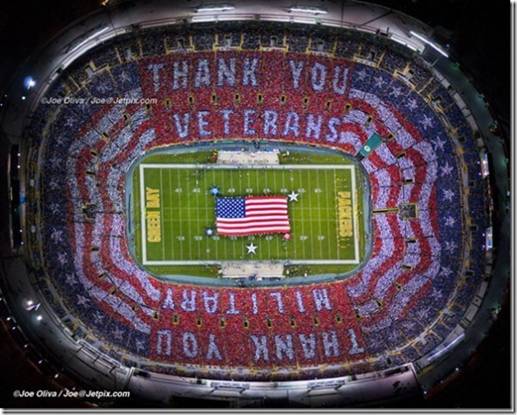 Forward this to as many people as you can so that they can see this incredible display!

Thanks to Gail Bowers, theblackboardhelper@gmail.com

Update: I noticed the (2011) date in the corner of one picture and decided to do some research.  The statement included with the pictures claimed that ESPN went to commercial instead of broadcasting this tribute to the national audience, that only those attending the game could see it.  And Snopes confirms that is true!

Forty years toiled in the Tel-com industry, married for 36 years widowed at sixty-one. New girlfriend at sixty-five. Was a Tea Party supporter. Today a follower of the Last American President to be honestly elected, Donald J. Trump.
View all posts by On the North River →
This entry was posted in All the News not fit to print., Blogbits, Military, planes and tagged patriotism. Bookmark the permalink.