3M, China, The China Virus and the moral equivalent of War. 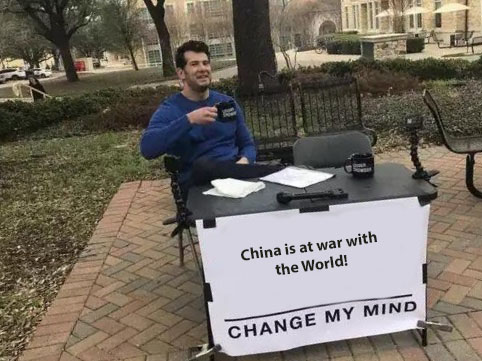 I put it to you that we were in a state of War with Communist China since December.

All this is window dressing, bringing critical industries back to our shores is the only thing to do, especially medical.  Whatever the cost.

China is at war with the world.

Evidence is mounting that China knew critical things about the Cov19 virus by December.  Most importantly that it was capable of human to human transmission.

Knowing that China still allowed 4 million Chinese to leave Wuhan during the Chinese New Year, (hundreds of thousands of Chinese workers traveled from Italy to China and then back to Italy, after the New Year holiday),  China allowed travel back and forth to all ends of the world after knowing about the Covid19 virus and how contagious it is.

One analysis (that I agree with) is that China’s economy was already shaky and it wished to “Share” the economic damage with the other nations of the world so as to NOT be at a disadvantage economically.  So they decided to kill millions.

Forty years toiled in the Tel-com industry, married for 36 years widowed at sixty-one. New girlfriend at sixty-five. Was a Tea Party supporter. Today a follower of the Last American President to be honestly elected, Donald J. Trump.
View all posts by On the North River →
This entry was posted in 2020, China, Evil. Bookmark the permalink.

2 Responses to 3M, China, The China Virus and the moral equivalent of War.