Preaching to the choir.

The Real Issue With Self-Driving Cars

The car is on a two-lane road with a hard and fixed barrier on the right side, and on-coming traffic on the other side.  A child runs out in front of the vehicle inside of the stopping distance.  The car detects the child instantly, but is unable to stop.

The vehicle is able to compute the probability of your death (and everyone else in your vehicle) with a fair degree of certainty if it intentionally crashes into the fixed object to avoid the child.  If the oncoming vehicle is also self-driving it may also be able to compute the risk of death or serious injury for those occupants if it hits that car intentionally since the vehicles are probably communicating.  If it hits the child it also probably can compute the odds (very high, perhaps 100%) that the child will die as well.

The vehicle must strike something due to the physics of the situation.

What decision does the car make and who or what does it hit?

In the article the writer makes the point that the two million road miles racked up by now with 60 plus accidents is a lousy driving record, even taking into account that the self-driving cars were mainly not found to be at fault.

but to do that, on occasion, he has had to bend or brake the traffic laws!  Such as running a red light if he determined that the car or cars behind him were going to fast to stop in time.   His question is; what does the programing of the robot behind the wheel say to do in those incidents but the evidence of the high number of accidents occurring where the autocar is hit in the rear seems to answer that question.

Since you are not driving you are never “at fault” for hitting someone else, which means you personally will never be tagged in such a lawsuit — the company that made the car will be!

This provides a powerful incentive for the vehicle designer to avoid hitting the other party even if they have to injure or kill you in order to do so since you have some contractual relationship with said firm (in which they might, and probably will, try to limit their liability) but the other party does not and thus can’t be bound by same.

Or in other words, “Open the pod bay doors, HAL”.    “I’m sorry Dave, but I can’t do that. This is a No Loading Zone and would violate my prime directive.” 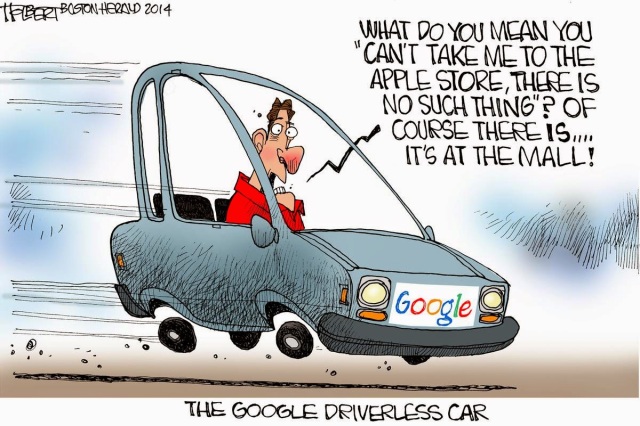 Forty years toiled in the Tel-com industry, married for 36 years widowed at sixty-one. New girlfriend at sixty-five. Was a Tea Party supporter. Today a follower of the Last American President to be honestly elected, Donald J. Trump.
View all posts by On the North River →
This entry was posted in Blogbits, PSA, Tech. Bookmark the permalink.