Cry for the (New) Beloved Country!

A Socialist Les Miserables in Venezuela

A mob of starving people advanced on the presidential palace chanting, “We want food”. They were met by soldiers and police dispatched by the tyrant from his lavish palace decorated opulently with a golden sun, giant rock crystal mirrors, sparkling chandeliers and towering oil portraits. 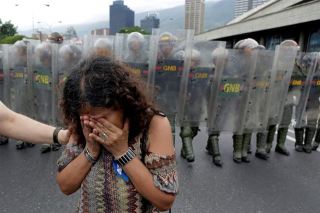 Thirty-six people shot in Chicago over the weekend…

…Fifty people killed by way of the rifles of the palace guard of Venezuela’s President.  But only one is reported by the Media.   “If a tree falls in the forest and no one is there does it make a sound?”  or “When mass murder and starvation occur in a ‘Socialist Paradise’ will the liberal media take notice?”.

I wish we could lock Bernie Sanders, Elizabeth Warren and Barack Obama in a shipping crate and drop them into Venezuela.   Might not help the Venezuelans but it would do us a world of good.

Forty years toiled in the Tel-com industry, married for 36 years widowed at sixty-one. New girlfriend at sixty-five. Tea Party supporter. Today a follower of the God-Emperor Donald. Do like to kayak, cook, take photos, bike, watch old movies and read.
View all posts by On the North River →
This entry was posted in All the News not fit to print., Cranky, Fuck Obama, Media Bias, When Progressives Attack. Bookmark the permalink.