I told you so.

Elect an community organizer this is what you get…

Obama has thus been forced back into the very vacuum he created — but at a distinct disadvantage. We are now scrambling to put together some kind of presence in Jordan as a defensive counterweight to the Iran-Hezbollah-Russia bloc.

The tragedy is that we once had a counterweight and Obama threw it away. Obama still thinks the total evacuation of Iraq is a foreign policy triumph. In fact, his inability — unwillingness? — to negotiate a Status of Forces Agreement that would have left behind a small but powerful residual force in Iraq is precisely what compels him today to re-create in Jordan a pale facsimile of that regional presence.

Iraqi airspace, for example, was under U.S. control as we prepared to advise and rebuild Iraq’s nonexistent air force.

With our evacuation, however, Iraqi airspace today effectively belongs to Iran — over which it is flying weapons, troops and advisers to turn the tide in Syria. The U.S. air bases, the vast military equipment, the intelligence sources available in Iraq were all abandoned. Gratis. Now we’re trying to hold the line in Jordan.

Obama is learning very late that, for a superpower, inaction is a form of action. You can abdicate, but you really can’t hide. History will find you. It has now found Obama.

As I commented on another blog, compare Barry Shortpants and Vladimer Putin.

Putin is playing a terrible hand very well (for the short term at least), low Russian birthrate, corruption crippled economy and several hostile nations on his borders. In spite of that he is supplanting the United States in the Mid-East (with Barry’s help of course).

The community organizer is the laughingstock of the world, as the “Travels of Snowden” tour winds around the world as he shows each of Americas competitors all the goodies he stole from the NSA, while Obama continues to cut the US down to match his contemptuous vision of us. 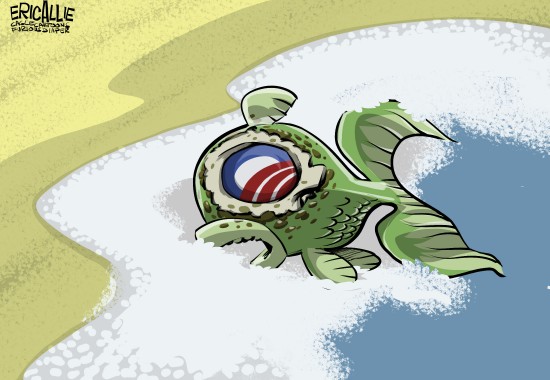 Forty years toiled in the Tel-com industry, married for 36 years widowed at sixty-one. New girlfriend at sixty-five. Tea Party supporter. Today a follower of the God-Emperor Donald. Do like to kayak, cook, take photos, bike, watch old movies and read.
View all posts by On the North River →
This entry was posted in All the News not fit to print., Blogbits, When Progressives Attack and tagged Obama failure. Bookmark the permalink.