The Chevy Volt has a five star safety rating from the NHTSA???

In mid-November NHTSA officials ran a new series of tests on Chevy Volt battery packs, tests which resulted in either fires or sparks in two of the three packs tested.

The “depowering” process involves hooking up what GM calls a “load cell” to the battery pack.  You can think of this as being similar to a gigantic light-bulb, and it’s sole purpose is to discharge electricity from the pack under controlled conditions.

The NHTSA current guidance for responding to electric vehicle accidents remains unchanged, at this time.  Occupants should exit safely (if they can) and move away from the vehicle, just as they would with a gasoline powered vehicle.  Emergency responders should check for markings that the vehicle is electrically powered, and exercise cautions such as storing the vehicle out-doors and away from other vehicles.

Does this seem to you that this was well thought out in advance? Considering that the battery pack lies deep inside the middle of the vehicle how likely is it that tow truck drivers will be willing or able to perform this operation or if the driver doesn’t have access to the “load cell” will he be willing to hook up to the disabled but dangerous Volt?

On the other hand: 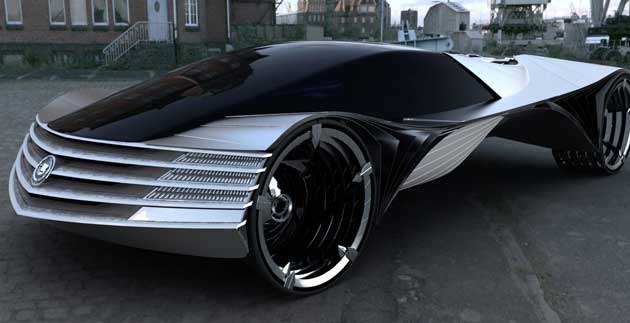 We’ll be honest. The future hasn’t quite turned out like we expected. While Saturday-morning cartoons promised us a world in which our fantasy-powered flying bubble cars would conveniently origami themselves into easily-transportable briefcases, reality has been a bit slower to abandon the traditional internal-combustion model. But that may eventually change. Scientists at research-and-development firm Laser Power Systems are working on a new turbine electric generator system powered by a thorium-based laser. If, like us, you spent the majority of chemistry class studiously analyzing the insides of your eyelids, you may not recall that thorium is a mildly radioactive metal with an atomic weight of 90.

The principle is fairly simple. The thorium would be lased to generate heat, which would then produce steam in a closed-loop system. That steam would then power a generator to produce electricity. Since it only takes a thin sheet of aluminum foil to shield the world from the weak thorium radiation and the element can’t be weaponized, it’s thought to be perfect for mobile power generation.

Scientists say that just eight grams of thorium could be enough to power a vehicle for somewhere around 300,000 miles of driving. If this all sounds a little far-fetched, it may pay to remember that thorium is already on automakers’ radar. Cadillac introduced the thorium-powered World Thorium Fuel Concept at the 2009 Chicago Auto Show.

The Japanese will have them, we won’t be allowed to. F*(K them!!

Forty years toiled in the Tel-com industry, married for 36 years widowed at sixty-one. New girlfriend at sixty-five. Was a Tea Party supporter. Today a follower of the Last American President to be honestly elected, Donald J. Trump.
View all posts by On the North River →
This entry was posted in Blogbits, Global Warming Hoax. Bookmark the permalink.

1 Response to Volt vs Nuc