Oh, BTW. The Atlanta police officers have walked off the job.

“A taser is considered a deadly weapon under Georgia law”

Chaser: Georgia Bureau of Investigation says it was blindsided by Fulton County District Attorney Paul Howard and unaware of plan to file charges against the officers involved in the Rayshard Brooks case while the agency was still conducting its investigation. 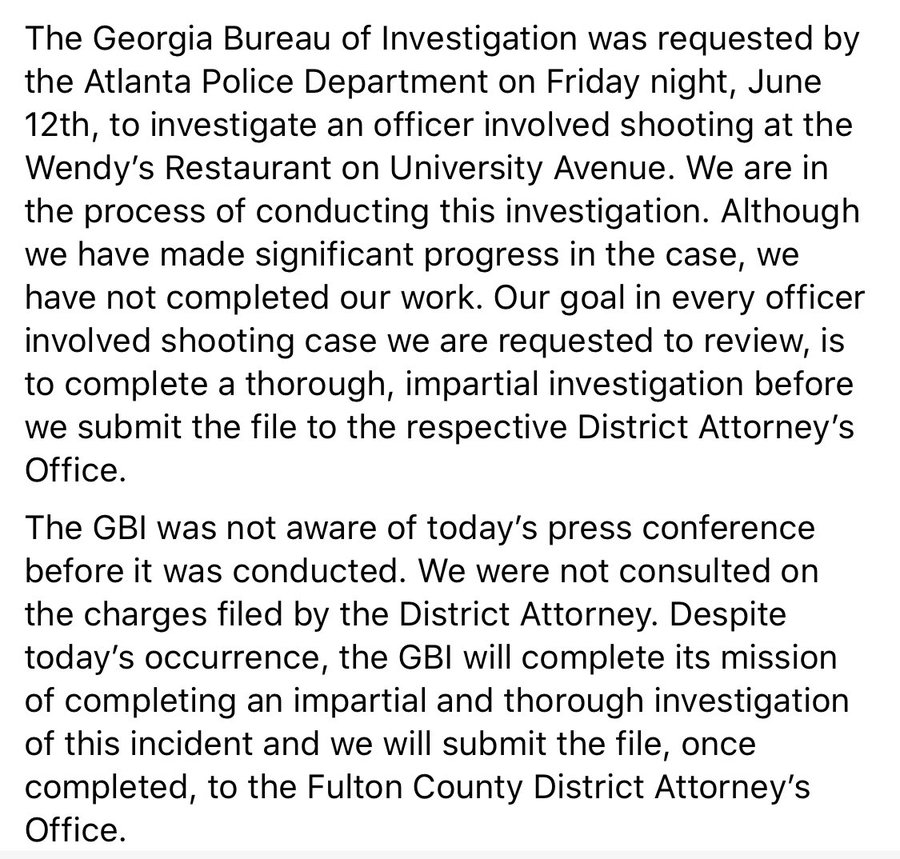 In some areas of Atlanta, the only police presence are the Georgia State Police and Country Sheriff units.  No APD.  There is no count of the total numbers of officers that have walked off the job.  The police unions are contacting the nearby Sheriff departments and asking them to refuse to respond to pleas from Atlanta for help. One statement says, “If they want to see what a city without police looks like, let them see it now”.

Other local media are seeing evidence of the walkout.

Atlanta INtown reports, “A drive around Zone 6 indicated there was not the usual APD presence. A Georgia State Patrol unit was handling a two-car accident at Boulevard and Edgewood Avenue around 9 p.m. The APD’s precinct at Wellstar Atlanta Medical Center appeared empty. Down in Grant Park, the Zone 3 precinct was populated by Fulton County Sheriff units.”

Forty years toiled in the Tel-com industry, married for 36 years widowed at sixty-one. New girlfriend at sixty-five. Was a Tea Party supporter. Today a follower of the Last American President to be honestly elected, Donald J. Trump.
View all posts by On the North River →
This entry was posted in 2020, All the News not fit to print., Can't fix Stupid, Police, When Progressives Attack, World's smallest violin. Bookmark the permalink.