With the cruise industry on life support, fleets have put to sea for an indefinite stay with many of their crewmen trapped on board.

Although there are no passengers aboard these ships, some of which cost well over a billion dollars to build, there are plenty of people still on board. Much of their crews are literally trapped on these vessels. As the world cut back travel due to COVID-19’s explosive spread around the globe and cruise ships became very unwanted guests at long-established ports of call, cruise line workers were trapped at their floating workplaces far from home.

Many of the countries they hail from are not wealthy enough to repatriate them even if they could, so for now, they are stuck in a hellish paradise of sorts on gargantuan pleasure boats that have been banished to the sea—barely moving islands onto themselves.

So, as you can see, the viability of the cruise industry and the massive ships—big moneymakers during the best of times, but huge money pits when cruisers are not on board—is far from certain. It is hard to imagine what would happen to all of these ships, some of which are modern marvels, if they simply had no demand for their services on the horizon. Few industries exist where such huge capital outlays can turn into equally large liabilities under these highly unique circumstances. Whereas air travel and hotels, both industries that are in great jeopardy, still serve a necessary service during a pandemic and during the economic recovery that hopefully follows, these decadent and hulking ships serve no purpose other than entertainment.

So, unless the COVID-19 situation takes a miraculous turn for the better, it’s hard to imagine a set of circumstances where throngs of cruise ships aren’t left out to sea. 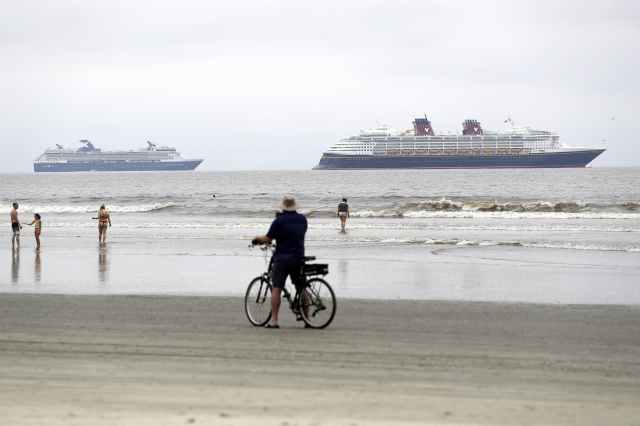 The Disney Wonder cruise ship, right, sits at anchor in front of Celebrity Cruise’s Millennium cruise ship, as people pass on the beach Thursday, April 30, 2020, in Coronado, Calif. The ships are just two of many cruise ships sitting idle along the country’s coastline, as the travel industry feels the effects of the battle to slow the spread of the new coronavirus. 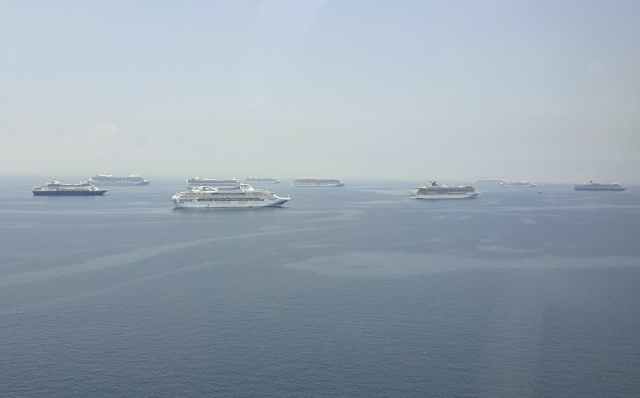 Forty years toiled in the Tel-com industry, married for 36 years widowed at sixty-one. New girlfriend at sixty-five. Tea Party supporter. Today a follower of the God-Emperor Donald. Do like to kayak, cook, take photos, bike, watch old movies and read.
View all posts by On the North River →
This entry was posted in 2020, Blogbits, Economy, On the Ebola River. Bookmark the permalink.