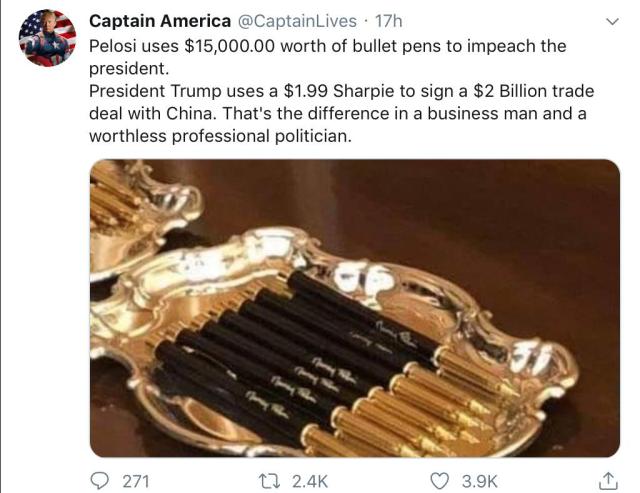 Why did it take Pelosi so long to sign and deliver articles of impeachment to Congress?

On December 18 The house passed two articles of impeachment against President Donald Trump. On Wednesday January 15 Speaker Nancy Pelosi formally signed the two articles of impeachment, obstruction of Congress and abuse of power using $15,000 worth of custom made Pelosium pens. It took almost a month to collect and refine enough Pelolium to manufacture the 32 pens used in the signing ceremony.

These particles are held together by dark forces called morons, which are surrounded by vast quantities of lepton-like particles called peons.

The symbol of Pelosium* is PU.

Pelosium’s mass has increased over time, as the morons randomly interact with various elements in the atmosphere and become assistant deputy neutrons within the Pelosium molecule, leading to the formation of isodopes.

Pelosium is formed whenever morons reach a certain quantity in concentration. This hypothetical quantity is referred to as Critical Morass. When catalyzed with money, Pelosium activates CNNadnausium, an element that radiates orders of magnitude more energy, albeit as incoherent noise, since it has half as many peons but twice as many morons as Pelosium.

Scientists point out that Pelosium is known to be toxic at any level of concentration and can easily destroy any productive reaction where it is allowed to accumulate. Attempts are being made to determine how Pelosium can be controlled to prevent irreversible damage, but results to date are not promising. Scientists also believe that this is the primary reason that Donald Trump’s impeachment is doomed to failure.

Forty years toiled in the Tel-com industry, married for 36 years widowed at sixty-one. New girlfriend at sixty-five. Was a Tea Party supporter. Today a follower of the Last American President to be honestly elected, Donald J. Trump.
View all posts by On the North River →
This entry was posted in 2020, Blogbits, Guest, Tongue in Cheek. Bookmark the permalink.