If you are worn out and irritated, long for solitude and as much distance from the damaging mental static that radiates from the Nation’s Capital.   Then here is the spot you seek.

I’ve gone as far as I can go — which was precisely my goal: to travel as close as possible to the exact other side of the planet from Washington, D.C. Cartographers know this as the “antipode” — pronounced AN-teh-pode — the global opposite of any given place. Provided I can get up on this slippery, steep-sided, barnacle-encrusted, seal-inhabited rock, I will have put myself as close to Washington’s antipode as I possibly can.

If you dig a hole straight down from the U.S. Capitol you don’t hit China. You hit a speck of water in the lower Indian Ocean. And this rock before me now, Cumberland Rock, just off the extreme southwestern tip of Australia, a rock named after a 19th-century ship that sank on a connecting reef, is certifiably the nearest land mass to the District’s antipode. You can’t get closer and still have solid ground under your feet. 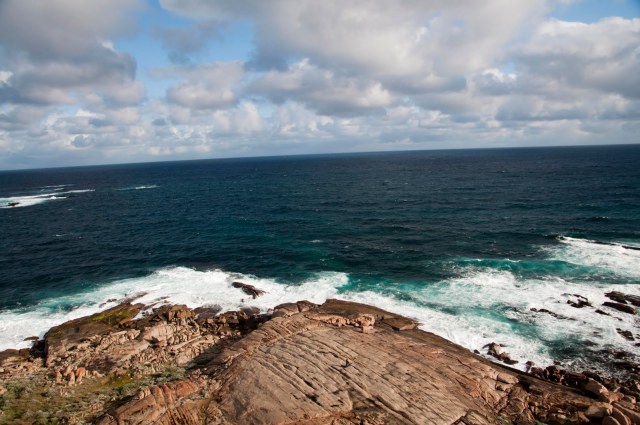 The rock out in the photo below is Cumberland Rock, which as the guide said, “holds a special meaning for people from the U.S.” Apparently, a Washington Post reporter, interested in finding the antipode – the “global opposite of any point” – of Washington D.C found it right here.

Now breathe deeply.   Not a whiff of shit to be discerned.

If you’re a burned-out Washington automaton, and you really, really, really, REALLY want to get away from beeping faxes and bimbo blather, this is where you come: Cumberland Rock, Australia. The end of the Earth. It’s 100 feet long, 50 feet wide and extends maybe 30 feet above sea level.

Unfortunately, this rock isn’t the true antipode of the Capital, just the nearest piece of dry land.

As it happens, Doyle and a colleague clambered up to the very top of the Capitol dome in 1993 when the Statue of Freedom was brought down for renovation. There, with the aid of more than 10 different satellites, the geodesists took an ultra-precise reading of the Capitol’s position on the planet, accurate to within five centimeters. Good enough for me, I say. The numbers are:

Using this data, Doyle then gave me the Capitol’s antipodal position, calculated “through the Earth-mass center” using the North American Datum of 1983. The numbers are:

So I had my spot. But I was soon deflated to learn the antipode — 12,507 miles away — was in the middle of a big watery nowhere, way down in the lower Indian Ocean near a giant rend in the ocean floor called the Diamantina Fracture, 741.6 miles southwest of Australia. The sea here is seriously deep — 15,912 feet, enough to fog anyone’s face mask. Only a few wayward trawlers ply the area, seeking hapuka fish. The surrounding waters are known as some of the stormiest and loneliest anywhere in the world.

Why lonely? Because there’s absolutely no land in the immediate neighborhood — no islands, no reefs, no rocks, no coconut bras, no grilled conch. Just water. Not exactly fantasy material.

Diamantina Fracture, it figures.  We all knew that the Suck in Washington DC was bad.  And at it’s Antipode is the Abyss.

Forty years toiled in the Tel-com industry, married for 36 years widowed at sixty-one. New girlfriend at sixty-five. Was a Tea Party supporter. Today a follower of the Last American President to be honestly elected, Donald J. Trump.
View all posts by On the North River →
This entry was posted in All the News not fit to print., Blogbits. Bookmark the permalink.