Friend went to Maine this weekend (while I was picking trash) to see the launch of the Navy’s newest big ship.  (Important update at the end) 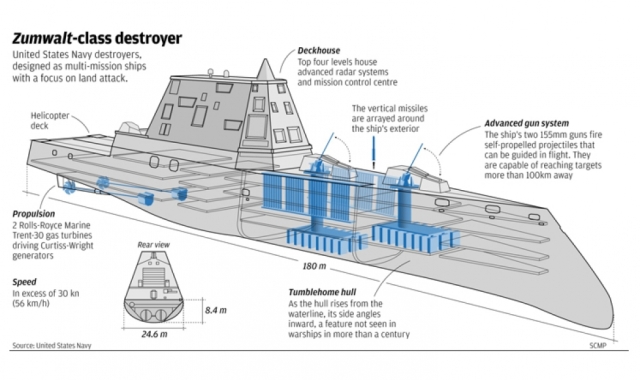 From the DDG-1000 ZUMWALT CLASS PAGE

No point in my trying to write anything more about this ship, follow the link above or here to US Navy 21st Century for a excellent and complete page on this ship and it’s sisters.

The only thing I would add is a note about the cost, 7 Billion dollars, cheap only if you compare it to our latest carrier (still a building) at 13 Billion and counting.  I’m not one to short our national defense or pinch pennies while crabbing about maintaining the leadership on the sea.  But everyone please keep in mind, the old ditty, “For want of a nail the shoe was lost …”.   The “Nail” I’m worried about is the loose nail at the top of all these billions spent and to be spent.  The current disgraceful Commander-In-Chief of our Armed Forces, BHO the boy from   Hawaii?  Well into his second term, he has yet to effectively use or deploy in a timely manner the forces at his command. Nor has he shown he understands the uses and strategies of Naval power.  My concern is about the number of hulls the US Navy has and it’s steadily dropping nature under Barry’s tenure.  He is only going to allow so much money to be spent on the military, and that amount has and will continue to fall as long as he is president.  20 billion dollars for just two ships means that X number of current Navy hulls are going to be slated for early retirement.   There comes a point that the US Navy will cease to be a world spanning navy and becomes a coastal defense force.

And in case you share our presidents lack of understanding of the importance and uses of naval power.  That will be a BAD thing.

PS.   I was just glancing at the page again after publishing it and noticed something, this 7 Billion dollar Navy ship has a suite of missiles, but the only long range missile in it’s magazine is the Tomahawk.  The same Tomahawk that Obie is phasing out, zero in inventory by 2016.  The rest of the missiles on board are intended to protect the ship from various threats; Anti-missile missiles, anti-submarine missiles, anti-aircraft missiles. But nothing else in the locker to carry the fight to the enemy.   Might as well stay at home.

Update: Today I read some stories about what a deadly cool and futuristic warship The Zumwalt is.  Because it’s designed to mount the newest weapons designed for the Navy; High Speed Railguns, and High Energy Lasers!  Futuristic, Cool, Real Deadly Man!!!

One problem, those weapons don’t exist.  Oh, they are under development and are even projected to be tested at sea in 2016.   If the programs aren’t canceled, like every single other advanced weapon system proposed for the Army, Air Force or the Navy since, well, since BHO came to office.   If by some miracle these programs are not canceled, at best it would be ten years before deploy-able real-world weapon systems would be available to the Zumwalt or it’s sisters.   That’s a long time for 22 to 25 billion dollars of  the Navy’s force projection to be tied up waiting for it’s punch to be installed.

At that, the Tomahawk would still be a better weapons system for most missions, longer ranged than the Rail-Gun, and do you really want to fire a high energy laser in the atmosphere from a very expensive ship that’s supposed to be “Stealthy”?

Flash Traffic!  I found this on The Duffel Blog and I had to add it to this post, they go together like lifers and new fish…

Update (Dec 8, 2015): I noticed a big spike in the hits going to this post and wondered why the extra interest, so I went looking and found this..

What had once been seen as the backbone of the navy’s future surface fleet[28] with a planned production run of 32, has since been replaced by destroyer production reverting to the Arleigh Burke class after ordering three Zumwalts.[29] The Zumwalt’s failure to meet cost and schedule estimates[30] is a result of a positive feedback loop of spiraling costs and plummeting productions numbers described by Chuck Spinney as the death spiral, joining other projects such as the F-22, F-35, and Future Combat System.[31]

Because of the decease in the number of hulls (to be built) the budgetary load of the R&D costs have increased to over $3 billion per ship.  This explains the otherwise unfathomable cost of $7 billion for a single destroyer, advanced or not.

Since this decision to cancel the building of the rest of the Zumwalt class and build more Arleigh Burke class missile defense destroyers has been made, it can be assumed that the expensive ‘stealth’ capabilities of the Zumwalt class are now not as useful as the Navy once thought they were.  The Navy seems to be going in the direction of  ‘I’m here, but I can defend myself’  as opposed to the Zumwalt’s  ‘Nah, Nah, you can’t find me’  defense.  With only two platforms, will the Navy ever produce or deploy a laser defense weapon?  Or is the cost and the limitations of that weapon system part of the demise of the DDG1000 class?

The upshot of this decision will mean more new Navy hulls in the water and that is a good thing.  Or course that brings us back to the Obama hex on Tomahawk missile procurement.   What will the all missile Navy be shooting?

WASHINGTON — Barely two weeks after the US Navy commissioned its newest and most futuristic warship, armed with two huge guns that can hit targets 80 miles away, the service is moving to cancel the projectiles for the guns, citing excessive costs that run up to $800,000 per round or more.

No Laser, No Missiles, No Rail Gun and now No Main Gun ammunition; what’s it for?

It’s the worlds most expensive target.

Forty years toiled in the Tel-com industry, married for 36 years widowed at sixty-one. New girlfriend at sixty-five. Was a Tea Party supporter. Today a follower of the Last American President to be honestly elected, Donald J. Trump.
View all posts by On the North River →
This entry was posted in All the News not fit to print., Blogbits, Fuck Obama, Military, News and opinion, The Regime, Updated, When Progressives Attack and tagged big helpless target, Navy, Zumwalt. Bookmark the permalink.