Nice, (in a new video game) the villians are cute combination of Tea Party and OWS

Right. Anyone disagree that the working title of this California made POS was Occupy-Tea Patriots?

I have officially and finally had it with Tom Clancy. Of course the only writing he does these days is limited to the back of checks.

Barry, in his own words

I’d say you cannot make shit like that up, but apparently you can

Second of all, many of the places he says he’s served seem to come from movies. Finally, the guy’s own mother “doesn’t believe any of it.”  This shit really pisses me off.

From these lips to Mahmoud Ahmedinejad’s ear:

Rogue states with nascent nuclear weapon programs (cough, Iran, cough), consider yourselves on notice. The Air Force has started taking delivery of Massive Ordnance Penetrators. Yup, the 30,000-pound bunker busters, known as MOPs, designed to penetrate 30 stories of reinforced concrete (Oh, and the massive bomb’s name is almost as charged as the term, Pre-Dawn Vertical Insertion, if you get what I’m sayin.)

The service apparently got its first production MOP in September and has been stockpiling them ever since. That’s a decent turnaround since April when the Air Force gave Boeing a $28 million contract to deliver eight MOPs and their associated loading equipment. The service gave Boeing a follow-on $32 million contract for eight more MOPs in August. No word on why that deal cost an extra $4 million when it appears otherwise identical to the April contract.

The Air Force has modified several B-2 stealth bombers to carry two of the GPS-guided bombs, apiece. This pretty much tells you all you need to know about the type of mission the MOP will be used for; a super bunker-buster carried by our most survivable heavy bomber. It’s meant to threaten nations like Iran and North Korea with the prospect of an air strike that can take out their most hardened targets.

I’ve got to say, this is pretty timely, given the recent flood of publicity surrounding Iran’s alleged progress toward building a nuclear weapon. While the MOP is big and costly, the West may have more subtle ways of putting kinetic pressure on states like Iran.

B-2 Bombers: Taking the “fun” out of fundamentalism.

…continuing a proud tradition  A flight on a B-17

He points out that the OWS group at Zuccotti Park was a small (<100) gathering, the Tea Party protests last year had millions of members. Also, the small group in NYC, left mountains of trash and human filth behind. The Tea Party departed after the area was cleaned by them. 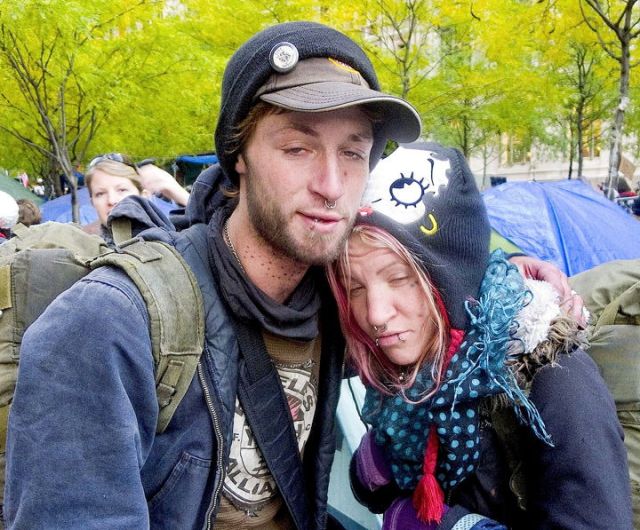 The Tea Party versus the Occupiers

Forty years toiled in the Tel-com industry, married for 36 years widowed at sixty-one. New girlfriend at sixty-five. Tea Party supporter. Today a follower of the God-Emperor Donald. Do like to kayak, cook, take photos, bike, watch old movies and read.
View all posts by On the North River →
This entry was posted in All the News not fit to print., Blogbits, Cartoons, Low Tide, When Progressives Attack and tagged B-17, B-2, dopes, MOP, OWS. Bookmark the permalink.

3 Responses to Nice, (in a new video game) the villians are cute combination of Tea Party and OWS